Microsoft has brought a new app for Windows 10, which allows all the Android users to make phone calls or receive calls directly from PCs. It is the YourPhone App on Windows 10 which has got this feature. Windows 10 users with Android smartphones will be pleased to learn about this new feature in Your Phone App. 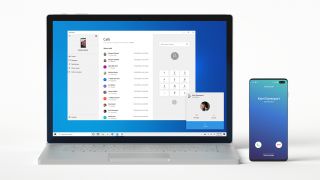 This Call feature testing was started back in October, and this feature comes with so many tricks like you can transfer the voice calls between the phone and the computer according to your wish. Like, if you want to switch your call from Phone to PC in between then you can instantly move your call. This new update has been coming out in the Phased Manner and will be out for all the users in the next few days.

Thank you #WindowsInsiders for your feedback over the last couple of months. Today, we're pleased to announce the general availability of the #YourPhone app Calls feature, which allows you to receive and make phone calls on your PC: https://t.co/m47kLcXgbS pic.twitter.com/4GuIOXjR71

For this feature, you need to be on Windows 10 May update or higher. And this Call feature will be out for Android smartphones which run on  Android 7.0 (Nougat) or higher. Yet, there is no news of this feature supporting iOS devices.

To use this feature, your phone should be connected to better Internet and Windows 10. To make a call, you can see a dial pad and the list of calls on the app. If you wish to switch the call from PC to Phone then you can press the “Use Phone” button.

Check if you are from the lucky ones who have got the update or else wait for a little while to get this feature. This year Microsoft has done plenty of work on Your Phone like, it has an ability to send and receive text messages, Phone screen features, and so much more improvements have been done on the app.