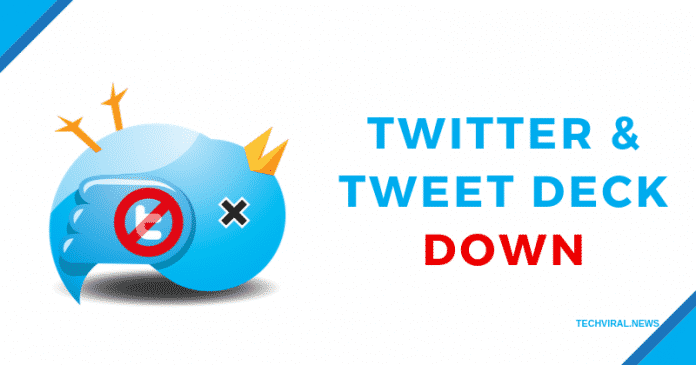 Twitter and Tweetdeck are experiencing some downtime since the early morning hours of Wednesday, 2nd October. According to a third party website, the issues are being reported in North and South America, Europe, and the Asia Pacific.

Tweetdeck is a social media dashboard application for the management of Twitter accounts. It is used by Content creators and Journalists. TweetDeck was automatically logging people out and was redirecting them to the mobile Twitter site.

We've been experiencing outages across Twitter and TweetDeck. You might have had trouble Tweeting, getting notifications, or viewing DMs. We're currently working on a fix, and should be back to normal soon.

Twitter is trying to fix the issue which has been annoying many content creators and news sites which want to spread their word to their online followers.
A Twitter representative had earlier told Reuters that the company was investigating issues with TweetDeck, which is used by reporters and other content creators for monitoring tweets from multiple Twitter accounts.
Performance issues started showing up at 5.30 AM IST and at 8 AM IST the Tweetdeck supposedly went down for all the users.
Twitter is actively working on the issue but it has been a harrowing experience for users.