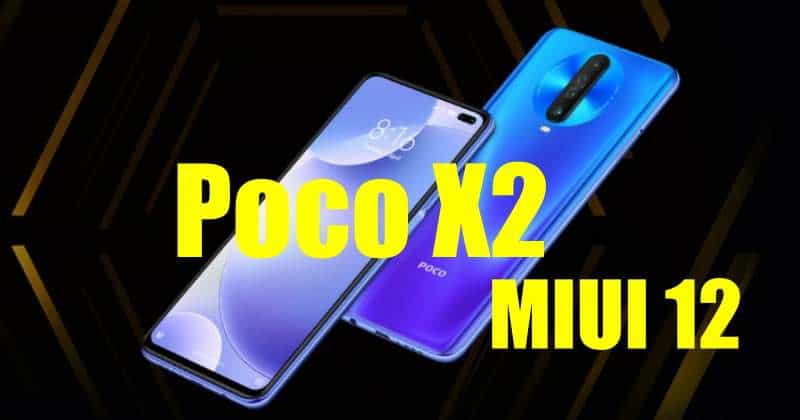 Poco has started rolling out the MIUI 12 update for Poco X2 device in India. Poco is a sub-brand of Xiaomi, and the Indian update of MIUI 12 is rolled out now. Most of the Poco X2 users have confirmed about the update on Twitter. The Poco users from India were waiting for the MIUI 12 update from the time it was launched.

Most of the Poco X2 users have shared screenshots of getting an update on their device on Twitter. Recently, Xiaomi has also announced that Poco F2 and Pocophone F1 will also get MIUI 12 update. Poco X2 is the first smartphone to get the new MIUI 12 update. It has simple interface, revamped animations, Android-10 like navigation gesture and much more.

The build number of MIUI 12 is MIUI 12.0.1.0QGHINXM, and the file size is 813MB. According to the reports, only a few of the users have got the update on their device. This might have happened because Poco might be testing that the update is not having any critical bugs in the update.

MIUI 12 update has brought new animations, simple and clear visual design, and improved floating windows feature. The Changelog says that MIUI 12 is the first Android-based OS which went through a privacy protection testing. Poco X2 users must download the update when the device receives the update. If you did not get any notification, then check out the update manually.

Poco X2 has launched with MIUI 11 OS in India. The price of the device is starting at Rs.17,999. The prices were increased due to Covid-19 pandemic. The device is a design-centric smartphone with an aluminium frame which is protected by Corning Gorilla Glass 5. It has a display of 6.67-inch Full HD+ resolution.

The smartphone has dual punch-hole setup and is powered by Qualcomm Snapdragon 730G with Adreno 618 graphics processor.