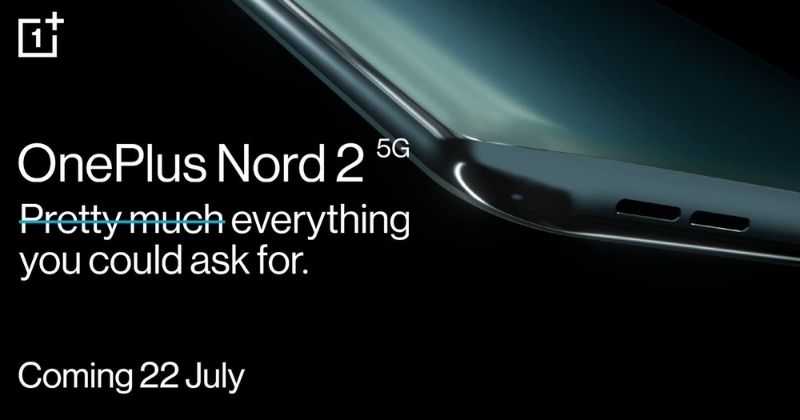 OnePlus is all set to bring a new smartphone in its mid-range Nord series, OnePlus Nord 2 5G. The new OnePlus device is set to launch on 22 July in India and Europe. After so many reports of speculations on the device launch, the company has now confirmed by posting a tweet.

OnePlus Nord 2 5G will go on sale on Amazon India, and the device is already listed on the e-commerce app. The device is expected to go on sale during the Amazon Prime Day sale that is scheduled on 26 and 27 July.

OnePlus Nord 2 will be Launched in India and Europe

Coming July 22 to a device screen near you — an epic tale of Fast. And Smooth. And a new Nord to rule them all.

OnePlus India posted a teaser video where the company has hinted towards the launch of Nord 2 5G on July 22.

The price is not revealed officially, but a tipster claimed that the price of the OnePlus Nord 2 5G would be roughly around Rs. 23,000. The OnePlus Nord was launched at a starting Rs. 24,999 in India.

While talking about specifications, there are rumors that OnePlus Nord 2 5G will have a 6.43-inch full-HD+ AMOLED display. In addition, it will have a triple rear camera setup with a 50MP primary sensor. And the selfie camera sensor is 32MP.

The company has confirmed that the new device will be powered by MediaTek Dimensity 1200 SoC. This is the first device to get MediaTek, as OnePlus has been launching devices with Qualcomm Snapdragon chipsets.

There might be two storage variants, 8GB RAM and 128GB internal storage, and the other one is 12GB RAM and 256GB storage. OnePlus Nord 2 5G will have an in-display fingerprint sensor, and the battery will be powered by 4,500mAh.

The smartphone will be available for sale on Amazon India. You can visit the site and click on Notify me option, to know when the phone is available.