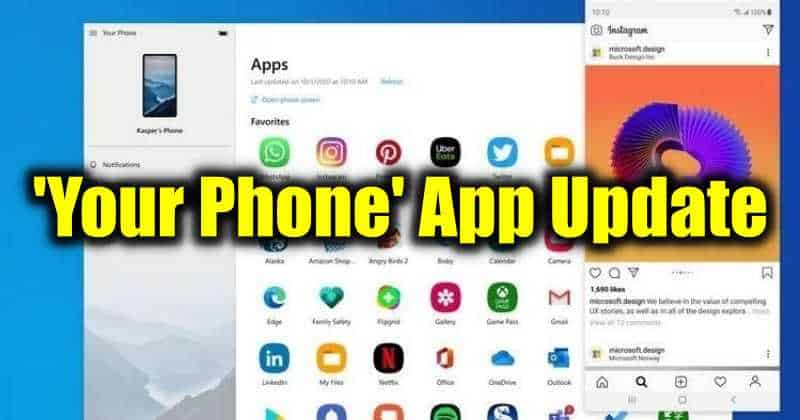 Microsoft has announced about the new “Apps” experience to its “Your Phone” App on Windows 10. Earlier in August, at Samsung’s latest “Unpacked” event, Microsoft announced the improvements in Your Phone app. After the testing, now Microsoft has started rolling out the features to everyone.

In the latest Insider build release notes, Microsoft announced about the rollout. The changes came in the app are like the app launcher available on your desktop and can pin apps to your taskbar and Start Menu.

The new Apps experience lets the users open and Stream Android apps from their phone in their Computer. “Compatible” feature is limited a selected Samsung Phones as of now, which includes Samsung Galaxy Note 20 Ultra.

Apart from allowing you to open Android apps in Windows, it also allows you to pin apps to your taskbar to use it easily. Microsoft said it is planning to allow the user to open multiple Android apps in a separate window.

Microsoft’s Windows Blog has posted about the news. However, according to the official documents, all the devices are not compatible with these features, only Samsung devices are able to use it.

Apart from having a Samsung device, there are some hardware requirements, like the device should run the latest version of Windows 10. The user must have the latest Your Phone app, and a shared Wifi connection.

The selected Samsung devices that have Link to Windows Your Phone App are:

Microsoft says that the features will roll out regularly, so it might take a few days to appear for everyone. If you have any issues, then you can send feedback with details on the FAQ setup available.