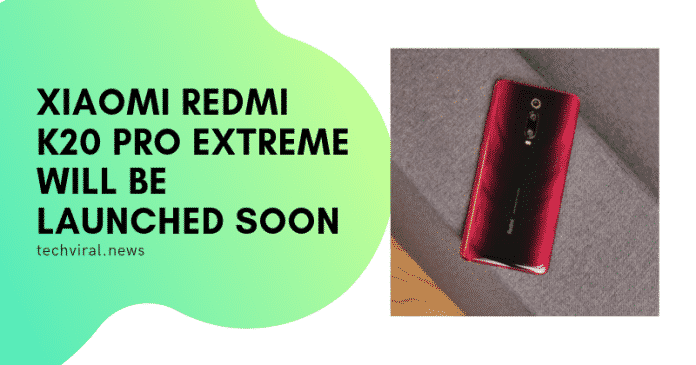 The Xiaomi Redmi K20 Pro Extreme edition will be unveiled on September 19 in China, bringing some internal upgrades including the Snapdragon 855 Plus chip set.

The latest device by Xiaomi, K20 pro is getting an extreme edition that is soon to be unveiled on September 19 in China. The device will be launched with some internal upgrades such as the Snapdragon 855 Plus chip set.

Xiaomi K20 Pro will be launched on September 19th.

Xiaomi’s K20 pro was one of the best budget segment flagship device with a Snapdragon 855 processor during its launch. As of now, a lot of devices are launched to give fierce competition to K20 Pro.

The highlighting feature of the forthcoming device is its advanced chipset, Snapdragon 855 Plus which boost the CPU speed from 2.84 to 2.96 GHz adding 15 percent enhancements in GPU performance with the help of Adreno 640 GPU.

The device will have a 6.4 inch AMOLED display with full HD+ display with no notches or holes as the front camera has a pop-up mechanism with an in-display fingerprint reader.

The device will support up to 12 gigs of RAM and 512 GB of internal storage. The battery capacity is 4,000 mAh with 27W fast charging support and a USB type-c port.

Moving towards its camera, K20 Pro extreme has a triple camera mechanism on the rear side out of which it has a 48 MP primary camera with an f/1.7 aperture, a 13-megapixel ultra-wide sensor for wide shots and an 8 megapixel 2x telephoto lens. The pop-up selfie camera is of 20 megapixels.

The device will set to launch in China on 19th September, and there is no launch date announced for India as of writing.