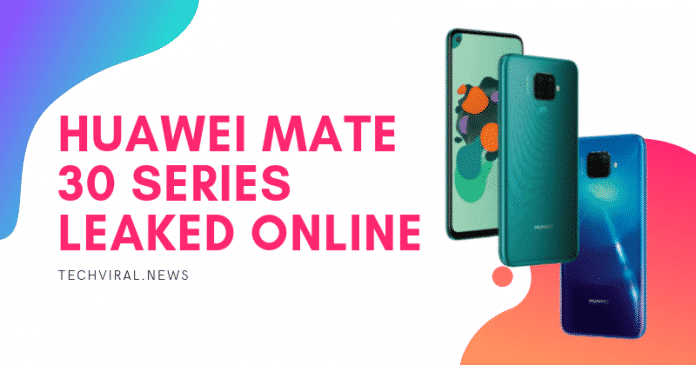 There is a lot of things to expect from the upcoming Huawei’s flagship smartphone, which will be called Mate 30. The device is set to launch 19th September, and it is not so easy for a company to keep the insights of an upcoming smartphone a secret.

A recent leak on the internet shows us the entire line up of the upcoming flagship by the Chinese telecom company, Huawei. The whole leak information started leaking from The Verge, and it includes photos of the forthcoming devices.

There are a total of four models in the Mate series namely: the top model Mate 30 Pro, the regular Mate 30, the Mate 30 Lite and the Mate 30 Porsche Design.

The Mate 30 and Mate 30 Pro will run on the new Kirin 990 chipset which also supports the 5G technology. So, these forthcoming Mate series are going to be 5G ready, which is pretty impressive.

The highlighted feature of the flagship device Mate 30 pro is a big rear camera module and a notch, yeah you read it right. The waterfall display gives the equipment an attractive look and ranges from the front portion to the bottom of the phone.

The second variant of the Mate 30 model is the mate 30 Porsche design that is in a red and black color scheme which looks something like this(see the image below).

The regular Mate 30 look same as the Mate 30 Pro model. It does not have the waterfall display, and also the notch is slimmer than the Pro model. Although, the backside images of the Mate 30 are not available yet, therefore, information about its camera module is not yet confirmed.

The mid-range model that is supposed to be run on the Kirin 810 chipset is a lot of different from the Mate 30 and Mate 30 Pro version. The rear camera has a square frame while both front and back has a curved glass.

However, Huawei will ship out these phones without Google application like maps, YouTube, but the device will still run on the Android operating system as it is open-source software. The devices will also be missing the official Google play store application.

The Chinese company will be releasing the device on September 19th, there a lot of information coming this week about the new flagship series by Huawei.