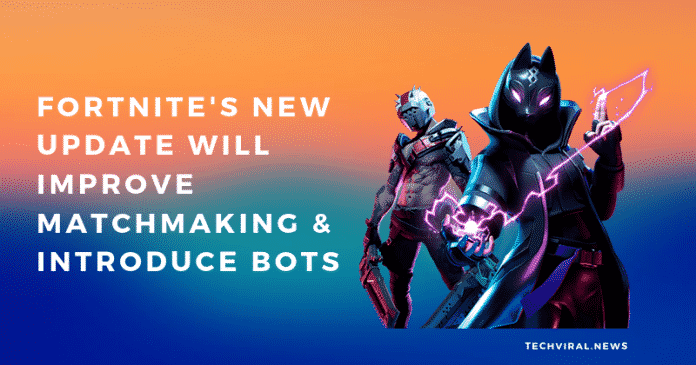 A recent blog post from Epic game confirms that Fortnite is working on to revamp the matchmaking in Fortnite. The next update of the game that is version 10.40 will improve the match making systems and make it more fair.

Over the past two years, Fortnite has not made any changes in its match making settings. However, the hype-based matchmaking ensures that the players are evenly matched. The latest version, v10.40, will have improved matchmaking to battle mode core. This means that the player will match with the opponent with similar skills. As you skills keeps increasing, you will be matched with the opponent with similar skills.

The update will be a good start for player with low skills as they will now be matched with opponents with skills similar to them. Eventually, you can now survive in the game for a little longer, if you are working on your skills.

Another feature that fortnite is working on is something, we all hate. Yeah, Bots. The upcoming season of Fortnite will introduce bots. As per Epic Games, the bots will behave similar to human players, which is quite obvious. The noob players will face more bots than actual players but with an increment in skills, you will meet fewer bots. Although, bots will not be present in competitive playlists.

The new Caped Crossover event has  already started featuring batman suit and the Gotham city location which will last till October 1st. The update v10.40 is still under test mode, Epic Games will soon release another announcement, when the update