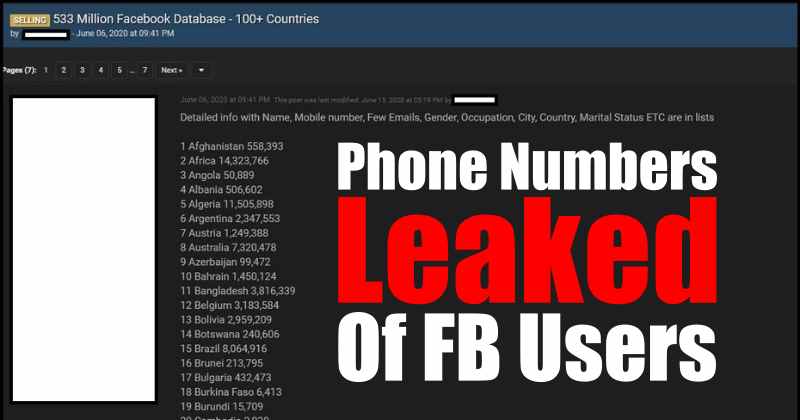 Mobile numbers of more than 500 million Facebook users are up for sale via Telegram Bot. A security researcher, who runs the Telegram bot has the information of these Facebook users. It is said that the phone numbers are leaked due to a vulnerability that was found in Facebook in the year 2019.

Phone Number of More Than 500 Million Facebook users on Sale

A security researcher, Alon Gal was the first to find out about the problem and posted a tweet on his Twitter account. According to him, the user who is operating the bot is missing the Facebook vulnerability. The vulnerability, lets anyone access the phone numbers that are linked to their Facebook account. And now, the phone number are being sold via the bot.

“Few days ago a user created a Telegram bot allowing users to query the database for a low fee, enabling people to find the phone numbers linked to a very large portion of Facebook accounts. This obviously has a huge impact on privacy”.

Users from more than 100 countries have been affected. As per the reports, the telegram bot allows the users to find the phone number of another Facebook user if the Facebook ID of that person is with them. Even if the user has the phone number of the person, he can get his Facebook ID. If anyone wants access of information, then they should pay $20 to the person behind the bot. Even the information is sold in bulk, like for 10,000 credits the charges are $5000.

In early 2020 a vulnerability that enabled seeing the phone number linked to every Facebook account was exploited, creating a database containing the information 533m users across all countries.

It was severely under-reported and today the database became much more worrisome 1/2 pic.twitter.com/ryQ5HuF1Cm

Gal says that this is a serious privacy matter. The issue was reported when it was first highlighted and today it has become more worrisome.

Screenshots were shared by Gal, where it can be seen that the bot is active from 12th January 2021, but it has data of users from 2019. However, the information is old, but most people do not change their phone numbers, so chances are high that the numbers which are being sold, are still being used by the users.