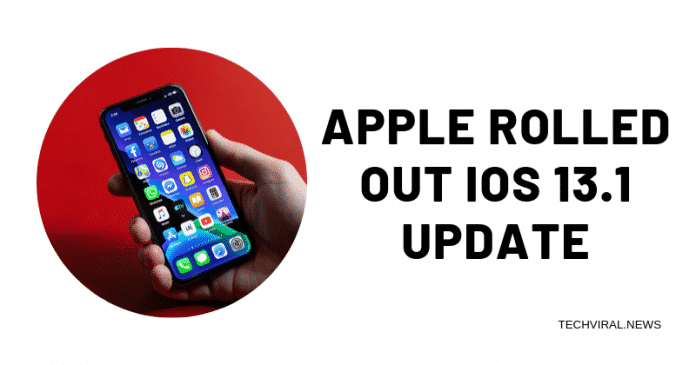 A few days ago, Apple launched its highly anticipated update of iOS 13 with a lot of new features and the dark mode. The update was made available for iPhone 6s and its successors.

Apple scheduled iOS 13.1 update for September 30th, but as per the reports, the update has been released a few days before the actual date. The latest iOS 13.1 update fixes some bugs such as Siri not working with CarPlay, mail, and the faulty app icons with some sign-in issues as well.

Moreover, a location permission bug in iOS 13 was requesting for location even after the user selected never share location with an app, the bug changed it to “Ask next time.”

Another bug in the iOS 13 could allow others to bypass the lock screen and access the user’s contact list by making a face time call and misusing the Siri’s voice over a feature to gain control.

Apple has added Share ETA feature in Apple that allows users to share the exact time of arrival with anyone right from the app.

Apple Music subscribers will now be able to read the lyrics of a song while listening. The tracks that are downloaded from the Apple Music are only supported, not the one in storage files or the ones received over whatsapp.

A few more features have been added such as Airdrop update and a few upgrades in the Automation tabs in shortcuts. Some other changes are also made in the font settings, personal hotspot pages, an orange dot will now symbolize beta apps.