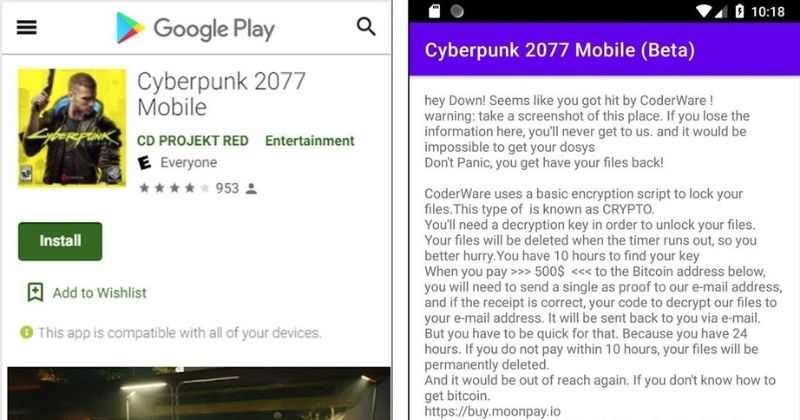 Cyberpunk 2077 game was the most waited game for 2020, but now it has been disappointing all the gamers. However, the game is available on every platform, even on mobile or tablet. But for that, you will need a Stadia services. An Android mobile version of the game is shown on the Play store, which has malware, so you must stay away from it. 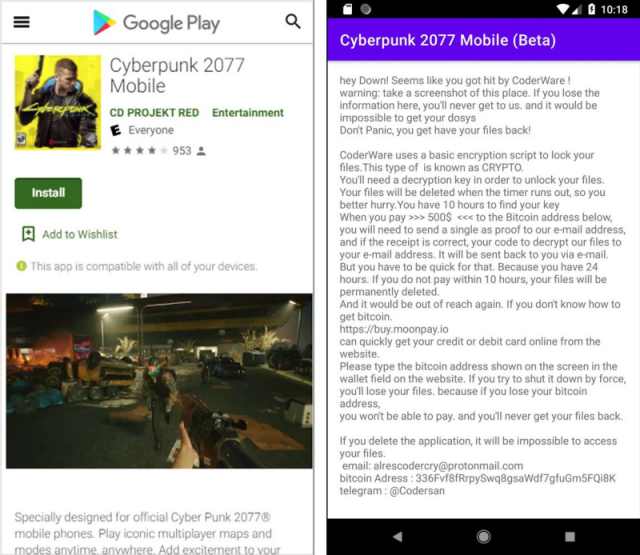 When the game was launched, it was full of bugs, and because of that, all the users asked for a refund. Sony has pulled down the game from the PlayStation Store.

According to the reports, there is a fake website that has a similar design to Google Play Store, and this site is providing the Android version of the “Cyberpunk 2077”. If you install the game, you will be getting a ransomware-ridden app instead of the pocket version of the app. And your phone gets lock once the malware is installed.

The name of the ransomware is CoderWare; it asks the user to send $500 Bitcoins in 10 hours, then only their phone will be unlocked; if not, you can lose your data from the device.

A malware analyst, Kaspersky said, a hardcoded key can be useful to recover the lost files.

This is not the first time that users have fallen for such tricks. Hackers use these tricks, and the user ends up losing their device data.

If you remember, earlier this year, we have seen BlackKingdom malware in a few of the free VPN installers that infected so many Windows PCs. CoderWare ransomware is the modified version that.

We recommend you not to install any apps or software that offers you games. Until and unless it is from the official website, do not fall for such fake links. If you want to play Cyberpunk 2077 on your mobile, then play it via cloud gaming services like NVIDIA GeForce Now or Google Stadia.